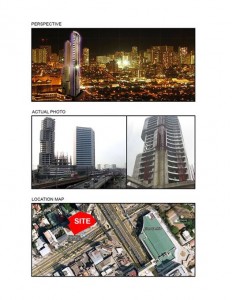 Property developer DoubleDragon Properties Corp. has closed a deal to take over the mothballed Skysuites mixed-use project in Quezon City, out of which it expects to earn P5.2 billion in total revenues.

The project is seen to “significantly” contribute to DoubleDragon’s net income starting the second half of 2014, the company disclosed to the Philippine Stock Exchange on Monday.

DoubleDragon expects to recognize the P5.2 billion in total revenues from this project in three to four years, company chair Edgar Sia II said in a text message.

“But a substantial percentage will be recognized this year as there is already partial construction completion,” Sia said. The company expects to resume construction on the project by the last quarter of the year, Sia added.

DoubleDragon plans to re-launch and re-brand the project within this year and continue the project, which it envisions to be “one of the most iconic and prominent landmarks along Edsa.”

Skysuites is a 38-story commercial, office and residential tower rising on a 2,811.6-square meter prime corner lot property at the corner of Edsa and Quezon Avenue. As designed, the structure will have two towers, a semi-circular residential tower and a curvilinear office tower with a commercial and parking podium that connects two towers.

DoubleDragon expects to continue both the construction and sale of remaining inventory of the residential units. It also intends to retain the commercial and office space for recurring rental income.

The property developer engaged Isla Lipana and Co. (PriceWaterhouseCoopers-PWC) as its legal, tax and financial advisor for this potential acquisition.

Skysuites was foreclosed by RCBC in September 2010. The land title of the property was transferred to the name of RCBC in December 2010 and there is no pending case between RCBC and GARHC pertaining to this property, based on an earlier disclosure.